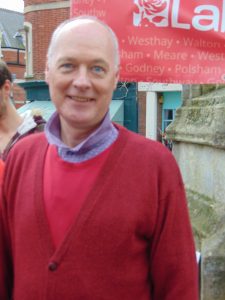 Paul was born in Somerset, grew up in Pilton and went to school in West Pennard, Wells and Bruton.  His father was a local farmer and County Councillor.  Paul was a solicitor in commercial law for over 20 years, acting as in-house solicitor for international companies in the UK and Europe and then in private practice in London. He retired early and returned to live in the area in 2013.

Paul joined the Labour Party in London in 2010 and volunteered in canvassing and consulting local residents in Vauxhall and campaigned in borough elections in Lambeth.  In the 2015 election he campaigned for Labour in the Bristol West and Wells constituencies.

Paul is an active member of the United Reformed Church in Glastonbury where he joins in with its support for vulnerable people in the local community.  He is a volunteer helping out his local Anglican church on its conservation projects, dealing with Mendip District Council and monitoring its repair responsibilities.

Paul wants to work as a councillor to challenge and scrutinise the political choices which leave our roads and lanes riven with dangerous potholes, our local transport suffering even more cuts, and the vulnerable in our local community without the care which keeps them safe and independent.  He will work to change council contracts to promote business which supports community values and extend wherever possible support for tiny and small businesses in Somerset.  Cuts are a national political choice and they undermine the local values which protect and promote our local communities and businesses.  Paul strongly believes that not for private profit businesses are the Labour response to the public spending cuts made by Lib Dems and Conservative, not the privatisation of our local services and assets.

Modern Labour voices are needed at county and district level as a real alternative to the LibDem Conservative tag team working as proxies for their national leadership.  Paul will work with our 3 Labour councillors to help local people bring local solutions for our local issues.